After flirting with bear market territory in mid-May, equity markets rebounded off their lows through early June on emerging signs that inflation had finally peaked by April. Those optimistic expectations were shattered on June 10th after the U.S. Bureau of Labor Statistics reported inflation accelerated in May. The headline CPI rose 1.0% m/m and 8.6% y/y, while core inflation was up 0.6% m/m.

The negative surprise felt like a watershed event to some investors. Markets urgently priced in the escalating likelihood of larger rate hikes, slower economic growth, and an impending recession. U.S. equity indexes posted their worst week since March 2020 and plunged into an official bear market before closing above their mid-June lows.

Value stocks suffered less damage than growth stocks in the first half (-12.9% vs -28.1%), but each equity style and size category incurred double-digit declines. All eleven major S&P 500 sectors fell in June, although traditional defensive sectors – healthcare and consumer staples – performed best. On a YTD basis, energy was the only sector to post gains (+31.6%), despite experiencing a dramatic reversal in June (-16.9%). Consumer discretionary (-32.8%) was the first-half’s worst-performing sector due to mounting concerns about the strength of the U.S. consumer.

The same headwinds pressuring equities have also punished bonds. In response to the higher-than-expected inflation report, the Federal Reserve hiked rates at its June meeting by 75 basis points (bps), the largest single increase since 1994. The yield on the 10-year U.S. Treasury note soared to 3.5% by mid-June before retreating to 3.02% at month’s end.

Commodities were about the only asset class that worked during the first-half, although they were not immune to intense volatility. The broad-based commodity index climbed 18.4% YTD despite a 10.4% decline in June. The positive side of the recent pullback in commodity prices is that this month’s CPI print may finally reflect the peak in inflation.

The first-half of 2022 marked only the fourth time since 1976 that both stocks and bonds posted negative returns over two consecutive quarters. As a result, the 60/40 portfolio posted its worst first-half performance (-16.1%) in over 50 years. Given that major macro challenges remain unresolved entering the second-half, investor anxiety is certainly justified, if not too pessimistic. Despite an unemployment rate near all-time lows (3.6%), consumer sentiment has dropped below levels reached during the Great Financial Crisis when unemployment was 10%.

However, fear is an investor’s worst enemy during periods of extreme market stress. Bond and equity investors have already priced in the expected trajectory of interest rate hikes and perhaps even a mild recession. If economic conditions do not materially worsen and June’s 9.1% inflation report marks a peak, bonds and equities will likely pare their YTD losses. As a leading economic indicator, the S&P 500 has historically bottomed before conclusive evidence of an economic recovery materializes.

Our Chart of the Month reveals that the midpoint of the two years since 1950 (1962 and 1970) with worst first-half returns than 2022 were excellent buying opportunities. Nevertheless, the wide dispersion of second-half performance following the entire list of years with negative first-half returns suggests a more neutral near-term positioning.

Investors are anxiously awaiting the Q2 corporate earnings reporting season kicking off this week for confirmation that profits are still growing. Due to growth concerns, the S&P 500’s forward P/E ratio has already fallen this year from 21.0x to 15.9x, below its historical average. We anticipate continued, heightened volatility this summer as Q2 corporate results reveal the winners and losers during this challenging macro environment.

In late June, Chairman Powell of the Federal Reserve raised the issue that the Fed must accept a higher risk of recession to combat inflation. For investors, this view reflects the uncertainty about how much restraint, in terms of interest rate increases, will be enough to reduce inflation and what is the subsequent impact on economic growth and employment.

“A down market lets you buy more shares in great companies at favorable prices. If you know what you’re doing, you’ll make most of your money from these periods. You just won’t realize it until much later.” 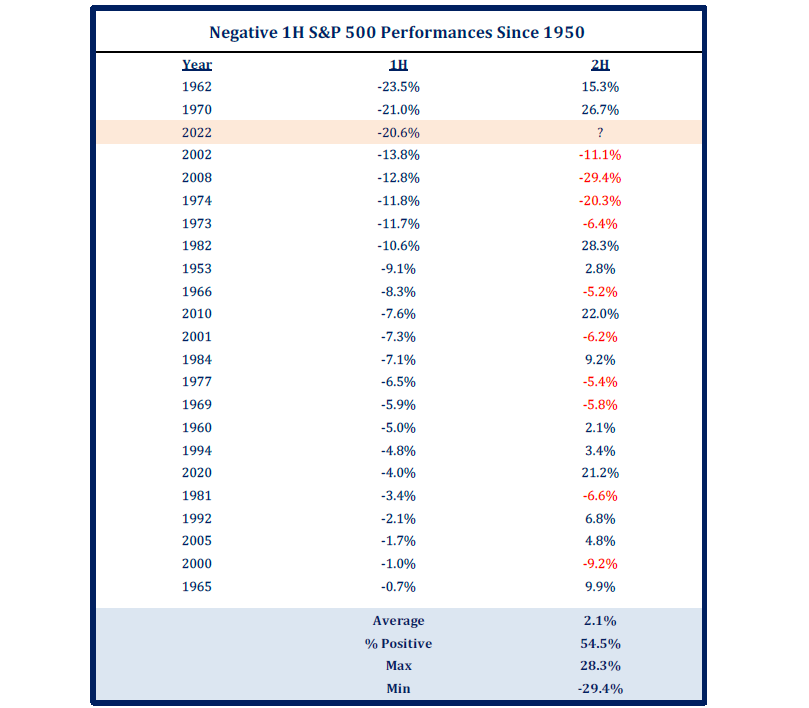 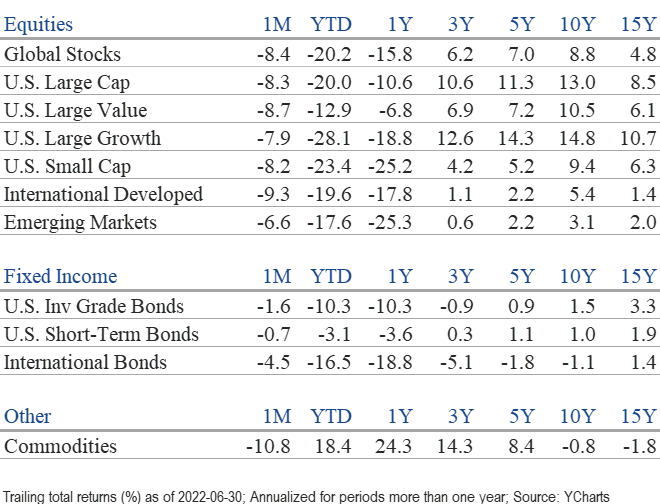 Chart of the Month: Strategas

“A down market lets you buy more shares in great companies at favorable prices. If you know what you’re doing, you’ll make most of your money from these periods. You just won’t realize it until much later.”