Markets began the new year on a positive note with the S&P 500 reaching an all-time high on January 3rd, the first trading day of 2022.  Risky assets have stumbled since.  Just three weeks later, the S&P 500 had declined 12% at January 24th’s intraday low. Thanks to a strong rally over the month’s final two days, the benchmark U.S. large-cap index recovered half its losses to post a -5.2% total return – the weakest January since 2009.

The pain among small-cap and growth stocks was more severe.  The final days’ bounce enabled the tech-heavy NASDAQ index (-8.9%) to avoid its worst-ever start to a year. By month-end, the Russell 2000 small-cap index had declined -16.8% from its 11/8/2021 peak. Large, mid, and small-cap stocks each recorded their largest monthly drawdowns since March 2020. Energy (+19.1%), the lone shining star, and Financials (0.1%) were the only positive of eleven major sectors, while the worst performer was Consumer Discretionary (-9.7%).

The Federal Reserve meeting notes released on January 5th revealed a potential shift from quantitative easing (QE) to quantitative tightening (QT) which spooked markets. Fed Chair Jerome Powell confirmed the hawkish pivot during his conference call on the 19th when he signaled rate hikes would begin in March. The market started to price at a much faster pace of Fed tightening this year, and their valuation rerating affected higher P/E and longer duration growth stocks the most. Geopolitical concerns involving Russia and China also weighed on investor sentiment.

With the global-tightening cycle being the dominant theme going forward, lofty equity valuations amid shrinking liquidity conditions make all risky assets more vulnerable. Corporate earnings and forward guidance will carry greater significance due to valuation sensitivity, and we’ve certainly witnessed dramatic stock price swings after corporate releases this earnings season. Take for example the so-called FANG stocks. Microsoft, Apple, Google, and Amazon bounced on upbeat earnings and outlooks while Netflix and Meta Platforms (Facebook) got crushed after missing forecasted results. Companies with reliable earnings growth and the pricing power to overcome inflation will most likely outperform in the current environment.

While heightened volatility surrounding tighter monetary policy is normal, bull markets do not typically peak around the initial rate hike. Global equities have posted gains in all eight previous Fed tightening cycles over the past 40 years, averaging an 11.3% annualized return. January’s selloff may prove to be an overreaction if inflation soon peaks, economic growth continues, and corporate profit margins remain elevated.

Value, international and small-cap stocks have historically performed better after the first rate hike. Small-caps reached bear market territory on January 27th. While the Russell 2000 index may drift lower, the forward returns from the date it reaches a 20% decline have been solid as shown in our Chart of the Month. With the valuations of small-caps much more modest than large caps (a trailing P/E of 17.6 vs 25.4 as of month-end), small-caps appear relatively attractive for long term investors. 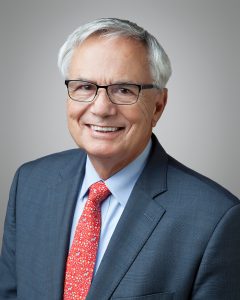 The year 2022 will be characterized by slower economic growth, slightly lower inflation (but still above target), and a Federal Reserve committed to reducing quantitative stimulus while also raising short-term interest rates. When we examine our leading economic indicators such as claims and capital goods orders, the signals remain positive.

“No one can predict with any certainty which way the next 1,000 points will be. Market fluctuations, while no means comfortable, are normal.” 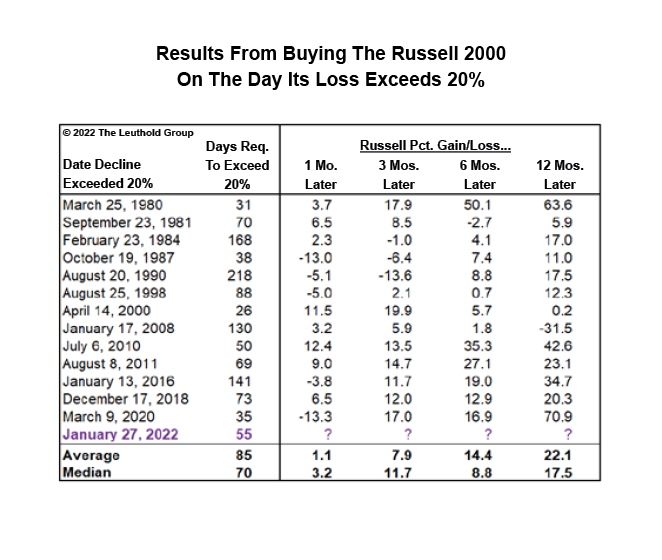 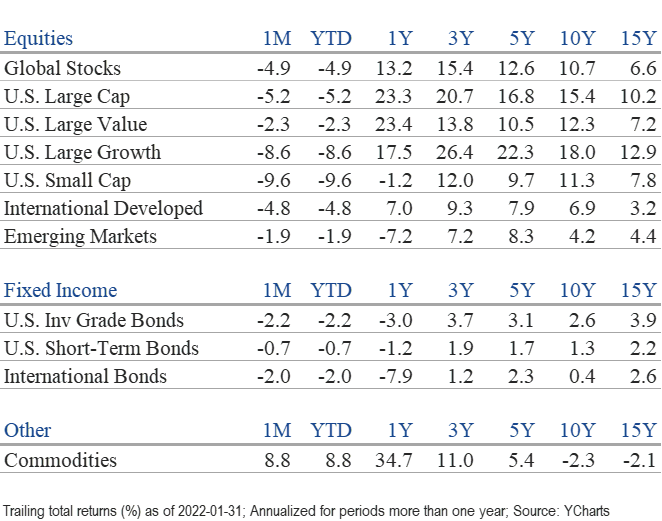 Chart of the Month Source: The Leuthold Group

“No one can predict with any certainty which way the next 1,000 points will be. Market fluctuations, while no means comfortable, are normal.”